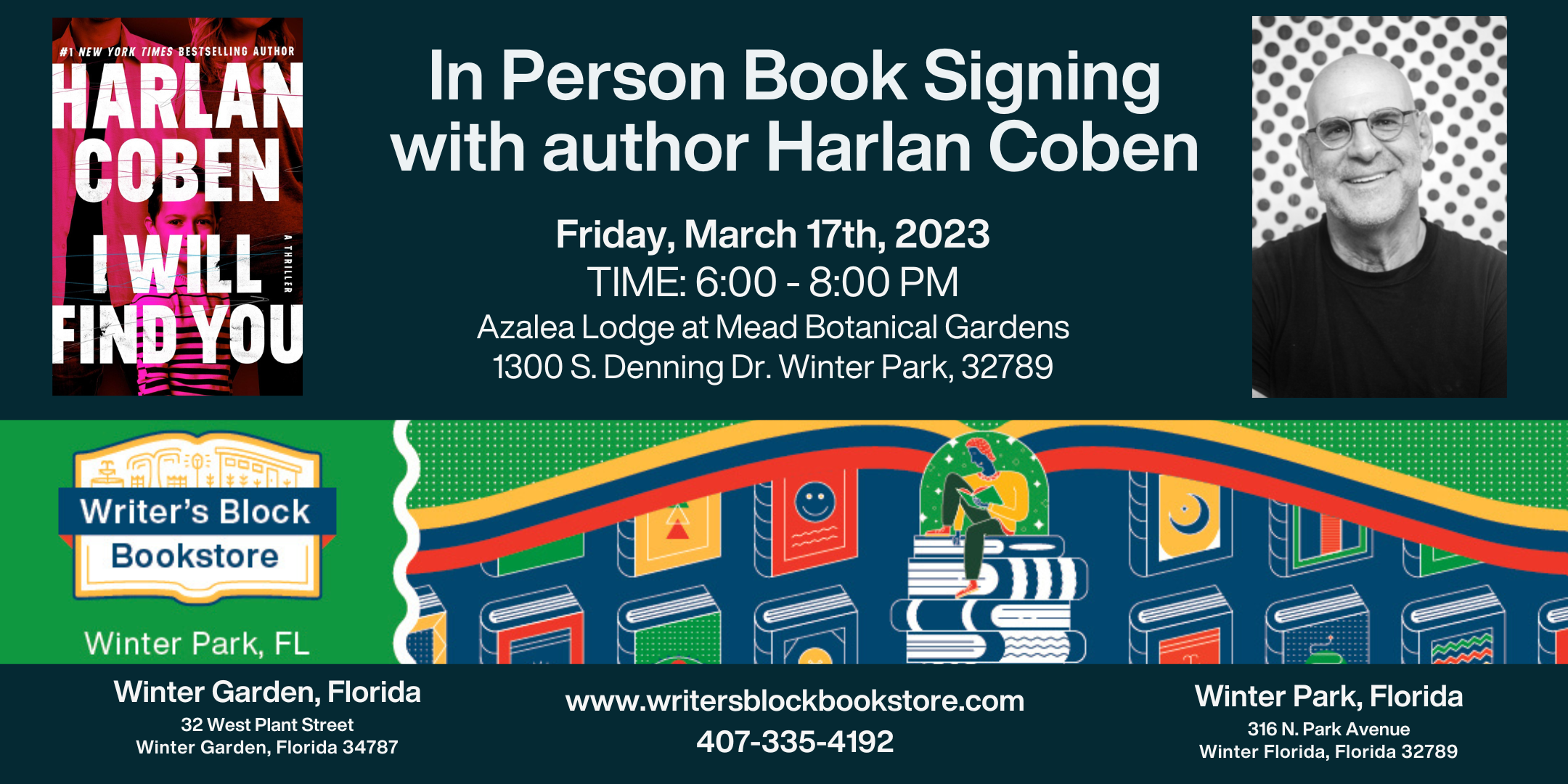 Come and join us we host Harlan Coben here in Winter Park at Azalea Lodge at Mead Botanical Gardens for an in-person event and book signing for his latest book, I Will Find You.

About I Will Find You

Five years ago, an innocent man began a life sentence for murdering his own son. Today he found out his son is still alive.

David Burroughs was once a devoted father to his three-year-old son Matthew, living a dream life just a short drive away from the working-class suburb where he and his wife, Cheryl, first fell in love--until one fateful night when David woke suddenly to discover Matthew had been murdered while David was asleep just down the hall.

Half a decade later, David’s been wrongly accused and convicted of the murder, left to serve out his time in a maximum-security prison—a fate which, grieving and wracked with guilt, David didn’t have the will to fight. The world has moved on without him. Then Cheryl’s younger sister, Rachel, makes a surprise appearance during visiting hours bearing a strange photograph. It’s a vacation shot of a bustling amusement park a friend shared with her, and in the background, just barely in frame, is a boy bearing an eerie resemblance to David’s son. Even though it can’t be, David just knows: Matthew is still alive.

David plans a harrowing escape, determined to achieve the impossible – save his son, clear his own name, and discover the real story of what happened. But with his life on the line and the FBI following his every move, can David evade capture long enough to reveal the shocking truth?

Harlan Coben is a #1 New York Times bestselling author and one of the world’s leading storytellers. His suspense novels are published in forty-six languages and have been number one bestsellers in more than a dozen countries, with eighty million books in print worldwide. His Myron Bolitar series has earned the Edgar, Shamus, and Anthony Awards, and several of his books have been developed into Netflix original series, including The Stranger, The Innocent, Gone for Good, The Woods, Stay Close, and Hold Tight, as well as the upcoming Amazon Prime series adaptation of Shelter. He lives in New Jersey.

The Azalea Lodge at Mead Botanical Garden (previously known as The Clubhouse) is the perfect indoor place for any type of special event — wedding receptions, business meetings, dances, workshops, family reunions, school functions and more! This beautiful 2,400 square foot reception hall has a capacity of 175. It includes a foyer, meeting space and main hall. An outdoor a terrace overlooks Alice’s Pond. Tables and chairs are included in rental fee. The Azalea Lodge is located next to the Little Amphitheater, a popular location for outdoor wedding ceremonies.

I Will Find You (Large Print / Hardcover)