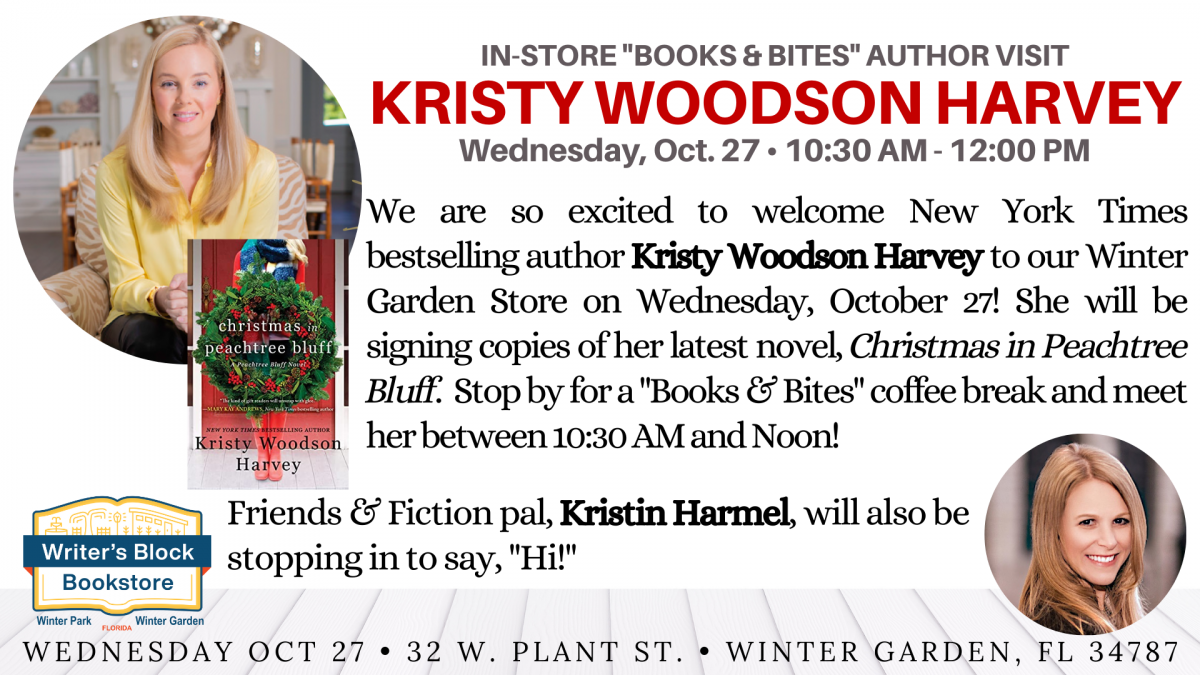 Scroll down to pre-order your copy of Kristy Woodson Harvey's new novel,
Christmas in Peachtree Bluff
Use coupon code "FRIENDSFICTION" at checkout for 10% off!

In the newest installment of New York Times bestselling author Kristy Woodson Harvey’​s Peachtree Bluff series, three generations of the Murphy women must come together when a hurricane threatens to destroy their hometown—and the holiday season in the process.

When the Murphy women are in trouble, they always know they can turn to their mother, Ansley. So when eldest daughter Caroline and her husband, James, announce they are divorcing—and fifteen-year-old daughter Vivi acts out in response—Caroline, at her wit's end, can’t think of anything to do besides leaving her with Ansley in Peachtree Bluff for the holidays. After all, how much trouble can one teenager get into on a tiny island?

Quite a lot, as it turns out.

As the “storm of the century” heads toward Peachtree Bluff, Ansley and her husband, Jack, with Vivi in tow, are grateful they’re planning to leave for the trip of a lifetime. But Vivi’s recklessness forces the trio to shelter in place during the worst hurricane Peachtree has ever seen. With no power, no provisions, and the water rising, the circumstances become dire very quickly…and the Murphy sisters, who evacuated to New York, soon realize it’s up to them to conduct a rescue mission. With the bridges closed and no way to access Peachtree Bluff by land or air, they set sail on Caroline’s boat, The Starlite Sisters, determined to rebuild their beloved town—as well as their family.

In “pitch-perfect tones” (Publishers Weekly) and written with her signature Southern charm, New York Times bestselling author Kristy Woodson Harvey explores the magic of Christmas, the power of forgiveness, and the importance of family in a tale that reminds us that, no matter the circumstances, home is always where we belong—especially during the holidays.

Kristy Woodson Harvey is the New York Times bestselling author of nine novels, including Under the Southern Sky, Feels Like Falling, and The Peachtree Bluff series. A Phi Beta Kappa, summa cum laude graduate of the University of North Carolina at Chapel Hill’s school of journalism, her writing has appeared in numerous online and print publications including Southern Living, Traditional Home, USA TODAY, Domino, and O. Henry. Kristy is the winner of the Lucy Bramlette Patterson Award for Excellence in Creative Writing and a finalist for the Southern Book Prize. Her work has been optioned for film and television, and her books have received numerous accolades including Southern Living’s Most Anticipated Beach Reads, Parade’s Big Fiction Reads, and Entertainment Weekly’s Spring Reading Picks. Kristy is the cocreator and cohost of the weekly web show and podcast Friends & Fiction. She blogs with her mom Beth Woodson on Design Chic, and loves connecting with fans on KristyWoodsonHarvey.com. She lives on the North Carolina coast with her husband and son where she is (always!) working on her next novel.