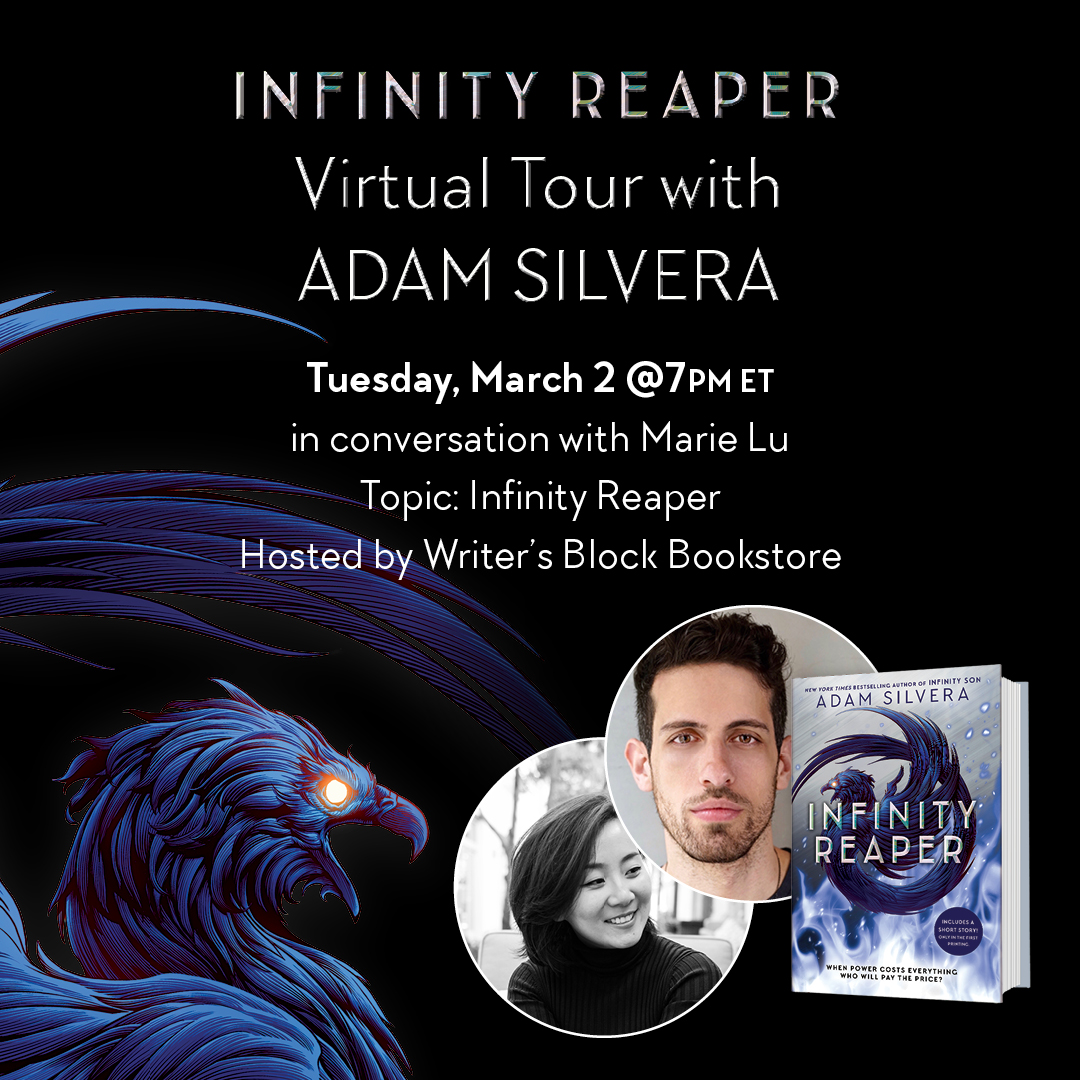 Click here to register for this free event
FREE EVENT

Virtual Tour with Adam Silvera, INFINITY REAPER
in conversation with Marie Lu
Scroll down to purchase your copy of Infinity Reaper.
ABOUT INFINITY REAPER
In this gripping sequel to the New York Times bestselling Infinity Son, Adam Silvera brings a diverse cast of heroes and villains to life in an alternate New York where some people are born with powers, while others steal them from the blood of endangered magical creatures.

Emil and Brighton Rey defied the odds. They beat the Blood Casters and escaped with their lives—or so they thought. When Brighton drank the Reaper's Blood, he believed it would make him invincible, but instead the potion is killing him.

In Emil's race to find an antidote that will not only save his brother but also rid him of his own unwanted phoenix powers, he will have to dig deep into the very past lives he's trying to outrun. Though he needs the help of the Spell Walkers now more than ever, their ranks are fracturing, with Maribelle's thirst for revenge sending her down a dangerous path.

Meanwhile, Ness is being abused by Senator Iron for political gain, his rare shifting ability making him a dangerous weapon. As much as Ness longs to send Emil a signal, he knows the best way to keep Emil safe from his corrupt father is to keep him at a distance. The battle for peace is playing out like an intricate game of chess, and as the pieces on the board move into place, Emil starts to realize that he may have been competing against the wrong enemy all along.

ABOUT THE AUTHOR
Adam Silvera is the New York Times bestselling author of More Happy Than Not, History Is All You Left Me, They Both Die at the End, Infinity Son, and—with Becky Albertalli—What If It’s Us. He was named a Publishers Weekly Flying Start for his debut. Adam was born and raised in the Bronx. He was a bookseller before shifting to children’s publishing and has worked at a literary development company and a creative writing website for teens and as a book reviewer of children’s and young adult novels. He is tall for no reason and lives in Los Angeles. Visit him online at www.adamsilvera.com.
ABOUT MARIE LU
Marie Lu is the NEW YORK TIMES bestselling author of the Legend Trilogy. Before becoming a full-time writer, she worked in the video game industry as a Flash artist. She currently lives in Los Angeles with her fiancee, one Chihuahua mix, and two Pembroke Welsh Corgis, and spends her time writing, reading, drawing, playing Assassin's Creed, and getting stuck in traffic.

The Kingdom of Back (Paperback)